The north-eastern part of Queensland has two great resources. Forest and sea. Both in abundance. Both being UNESCO World Heritage-listed. The Great Barrier Reef runs along the country’s northern east coast and is the world’s largest living organism. It stretches 2,300 km in length and is a gigantic wall of living organisms. The reef is an underwater home, a complex world and a delicate system. There are colourful corals, huge shoals and large turtles. All possible colours and colour-combinations can be seen. By snorkelling or scuba diving, you can discover this natural and grandiose masterpiece.

Not far from the reef is the rainforest Daintree, a World Heritage-listed ancient jungle with roots from the dinosaur era. The forest lives and breathes. It is steaming and creaking. From the meter-thick tree trunks, vines hang down, growing in spirals, covered in a carpet-thick moss. Large parts are pristine rainforest. A dense maze of chlorophyll filled plants that stretch upward in search of elusive sunshine. The rainforest offers many refreshing waterholes that provide coolness during the hot days. Daintree is an enchanted place between Port Douglas and Cooktown. 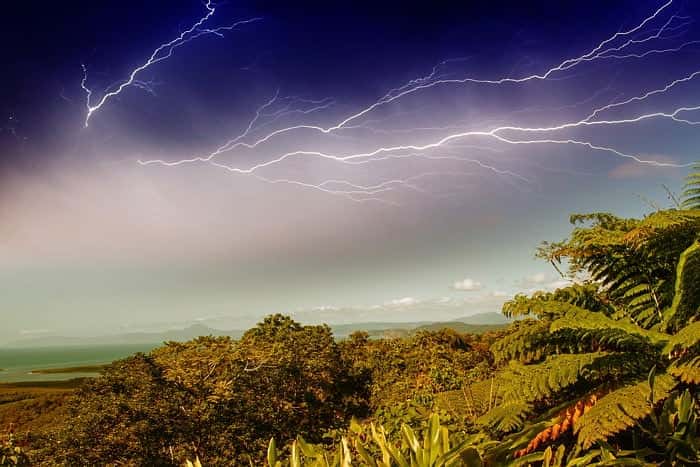 Northeast Queensland is a playground for the adventurous who likes warmth and nature. The dream of the exotic paradise is fulfilled here. The region is characterized by moist heat and periodically heavy downpours. During the rainy season which coincides with summer, the thunder is rumbling, and the sky is covered in white veins. Along the coastal roads, sugar cane plantations are swaying in the wind and inland, the peak of Australia’s largest mountain range the Great Dividing Range is visible, stretching all the way down through the country. The area is known for its banana plantations, providing work opportunities for backpackers who want to extend their work visas for another year. One constantly gets reminded that this is a distant part of the tropics. The cities are few and small with long distances in between.

Cairns is the largest city in the region (wotif.com/discover/australia/queensland/cairns/cairns.d889), but this does not stop tourists from going to smaller resorts like the holiday favourite Port Douglas and the remote Cape Tribulation. Nature is part of daily life and dangers are lurking here and there. Spiders, snakes and not least the deadly Box Jellyfish blights the area with its existence. Road signs warn of angry Cassowaries and salt-water crocodiles who have the habit of crossing the road. Along the horizon, gleaming paradisiacal islands are waiting to be discovered. Spend a night here and see more of the reef, one of the country’s largest tourist magnets. The entire coastline is a sun-kissed stretch of sprawling palm trees and endless sandy beaches. 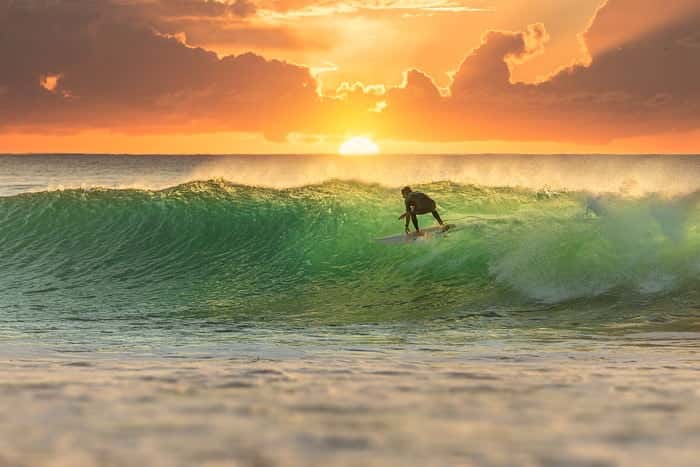 There are endless possibilities when it comes to travelling around in tropical Queensland. Depending on your budget, it may be a case of either hanging out at cheaper hostels or a chance of relaxing in luxurious resorts (hotelscombined.com/Place/Queensland.htm). Cairns is the largest city in the northern part of the region with 140,000 inhabitants. Many people choose to fly here, with their eyes set on the Barrier Reef. Several tour operators transport tourists to the beautiful islands of Green Island (wotif.com/things-to-do/great-adventures-green-island-eco-adventure-tour.a184825.activity-details) or Fitzroy Island for snorkel adventures (wotif.com/things-to-do/fitzroy-island-adventures-full-day-or-half-day.a395998.activity-details). You can also go on a longer trip and dive. Nearby are Atherton Tablelands, a large green area where you can go on a search for waterfalls and hike along one of several trails.

Cairns offers some nice restaurants and good shopping opportunities, but there is no dreamlike sandy beach here. This can be found about half an hour’s drive north in Palm Cove which is a much smaller place with a lovely holiday feeling. Another 40 minutes’ drive north and you arrive at Port Douglas (wotif.com/discover/australia/queensland/port-douglas.d6131595), which has moved up its rank in recent years. Fresh seafood is served at seaside restaurants and the beach is stretching out as far as the eyes can see. However, the prices are slightly higher in Port Douglas than in Palm Cove. It is not far from Daintree Rainforest. Swim and wander around Mossman Gorge in the southeast corner of the national park and head out on a journey along Daintree River. See wild salt-water crocodiles peek up over the water surface, throwing themselves after fresh food.

Cape Tribulation got its name after James Cook encountered the reef just outside, resulting in his ship running aground. Cape Tribulation is not a city, nor a town. No, it is nothing more than an area with around hundred inhabitants. The area consists of scattered resorts, hostels and shops. It is not possible to get here by public transport; a four-wheel drive vehicle is the key. The signs warn of crocodiles, cassowaries and jellyfish. Everything is seemingly deadly in this nook of the world, which for some only increases the excitement. Cape Tribulation is a place where you can take it easy and enjoy the surroundings. Make it easy and join in on a guided daytrip to both Daintree’s rainforests and Cape Tribulation’s national park (wotif.com/things-to-do/full-day-tour-to-the-daintree-rainforest-cape-tribulation.a471455.activity-details). 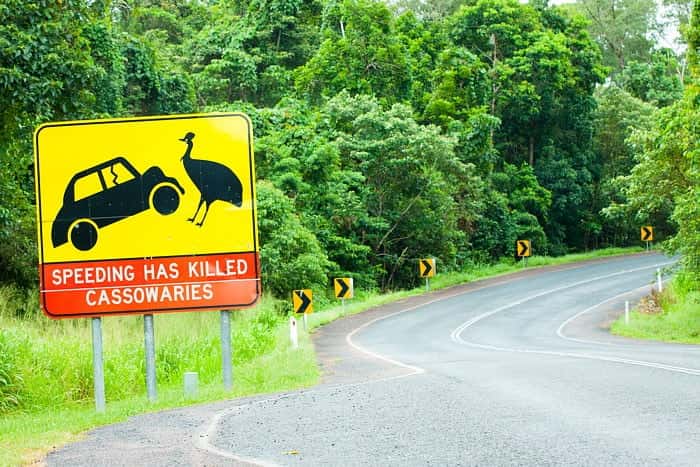 You will find several of Queensland’s postcard-beautiful islands within Lizard Island National Park. Surrounded by teal-coloured waters and with coral reefs next to the beach, they are ideal for snorkelling. The islands can be reached by plane or by travelling with a tour operator. Be prepared to pay some big money for staying in one of the five-star resorts, or camp if you are prepared to put in a bit of an effort.

Four hours and twenty minutes south of Cairns is Townsville (wotif.com/discover/australia/queensland/townsville.d6047631). It is a city that is easily overshadowed by other places along the east coast. But this is a fantastic destination. There are plenty of cafes to visit in the city. From Townsville you can head out to Paluma Range National Park, zigzag your way between stone boulders that have been polished smooth, and cool down in waterfalls. Hike or drive you way up on Castle Hill to watch the sun go down. And really, do not miss a visit to Magnetic Island (wotif.com/discover/australia/queensland/townsville/west-point/magnetic-island-national-park.d6217248). The island is a short journey by ferry off the coast. Over half of “Maggie” is declared national park and there are about twenty beaches and a large group of wild koalas here.

The region has two separate seasons, the rainy season and the dry season. The dry season falls at the same time as winter, which is between May and October. This is when the temperature drops to about 20 degrees Celsius and the humidity decreases. The weather is generally sunny and nice during winter. The rainy season runs from December to March, at the same time as summer starts. The temperature is on average around 30 degrees Celsius. Days often end with rain and sometimes thunder. It is excellent to visit the area regardless of season but be prepared that heavy rain can cause roads to be closed off completely. Floods occur and sometimes roads cannot be used for several weeks. Summer is also high season for Box Jellyfish, although the jellyfish can be seen all year round. Keep an eye out and wear a protective wetsuit when you bathe.

Threats to reef and rainforest

For thousands of years, both reefs and rainforests have evolved and thrived, but this is changing, and fast. Large parts of the reef have already met a fatal end. Coral has been subjected to coral bleaching, adopted a whitish colour and died, leaving the waters lifeless. This change is thought to be caused by rising temperatures, a result of increased emissions being a major factor. Even the rainforest is seriously threatened and there is currently only a fraction of the forest left. The whole forest is not a national park, and much has been devastated over the years. Even the forest is affected by human activities such as littering and overall emissions. Be responsibly when you visit reefs and rainforests by only travel with eco-certified organizers. Do not litter, instead bring everything back with you. 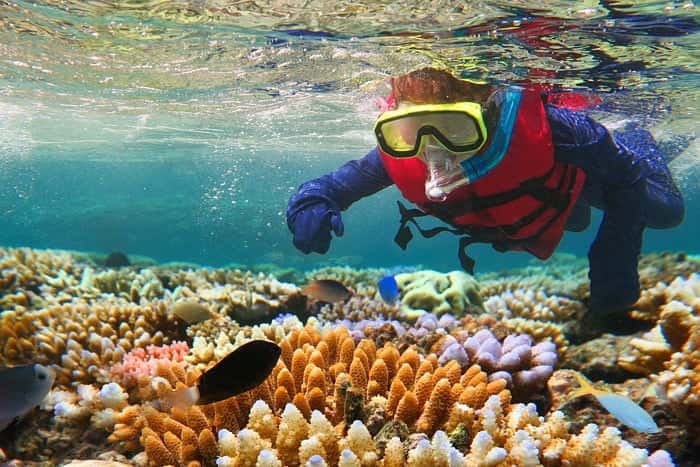 Cairns in the north and Townsville in the south are the main starting points in the region. There are many domestic and international flights to Cairns. You can also get here by bus and train. From Townsville Airport you can fly to, for example, Brisbane, Cairns and Sydney (wotif.com/Flights). Buses can also be accessed from here. To get around unhindered, a four-wheel drive is required (wotif.com/Car-Hire). During the rainy season, the roads quickly become muddy and it is not worth going on a trip without an appropriately equipped car. If you don’t have a car, you can book a tour with an organizer.

Start from the bottom and work your way up along the coast. Townsville is your first stop. Enjoy civilization. Visit the museum, go window shopping or enjoy a tea or coffee all the way through the city. See the view from Castle Hill and bathe in Crystal Creek at Paluma National Park. Take the ferry over to Magnetic Island and stay a couple of nights. Swim, snorkel and sunbathe until you can’t take it no more. Take the flight to Cairns or choose the greener option and take the bus. A few hours later you arrive in the capital of the northern region. Do not linger in the city, instead, take a daytrip to the green area Atherton Tableland or out towards the Barrier Reef. Both Green Island and Fitzroy Island are suitable for snorkelers and divers. Continue north and stop in Palm Cove, a quieter and smaller town with access to a fine sandy beach. Relax a day or two before you have enough and are ready for another adventure. 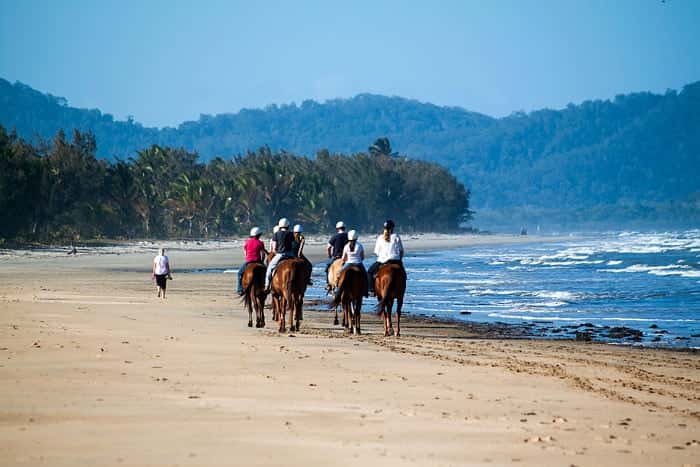 Head to the ancient rainforest of Daintree. Head toward Mossman and visit Mossman Gorge and its inviting oasis amidst the jungle. Take a dip in the water and walk under a roof of lush vegetation. Head to Daintree River where you can go on a river safari. Spot a wide variety of birds and plants pointed out by the guide. But the biggest star is the salt-water crocodile. These giants lie low until food is served, which is when they throw themselves out of the water to catch their unsuspecting game.

Visit the backpacker-favourite Cape Tribulation. Paddle a kayak, go on an outing in the rainforest or why not head back out to the Barrier Reef and look for turtles. Drive between Cape Tribulation and the wayward city of Cooktown. If the road is not flooded with rain, choose the scenic route along the coast, a road for four-wheel drive vehicles only. Drive over gushing streams and up and down steep slopes. It is a challenge that requires the driver to never take their eyes off the road. A real adventure. If you do not have the right kind of car, you can drive to Cooktown via an inland road.