When you land on Kangaroo Island you’ll be greeted by desolation. The island is surrounded by a mystique not found on the mainland. You might get a bit of a Jurassic Park-feel when you are on Australia’s third largest island. Kangaroo Island is in short known as KI, and it belongs to the state of South Australia. The island is located a little more than 100 kilometres southwest of Adelaide, a short ferry ride from Cape Jervis at the Fleurieu Peninsula. The British explorer Matthew Flinders gave the island its name after his crew ate kangaroo meat on the island at the beginning of the 1800s. And the name is really fitting. There is an abundance of animals, and especially kangaroos. But also, wild, windswept nature and an intense greenery, rough boulders and inviting sandy beaches. Kangaroo Island measures 155 km from east to west and is 90 km wide at its widest point. The island is now an obvious holiday destination for both tourists and locals. Every year, more and more visitors come to the island, attracting both outdoor enthusiasts and lovers of luxury. Just under 5,000 people live permanently on the island with this fantastic wildlife. The koalas that feeds on the eucalyptus leaves rests in the tree canopies. Skipping kangaroos and Wallabies stroll freely on the grounds. And there are also a variety of bird species to see, such as the curious pelicans and the laughing Kookaburra. To this, add sea lions that sunbathe on the beaches, furry seals and waddling penguins. 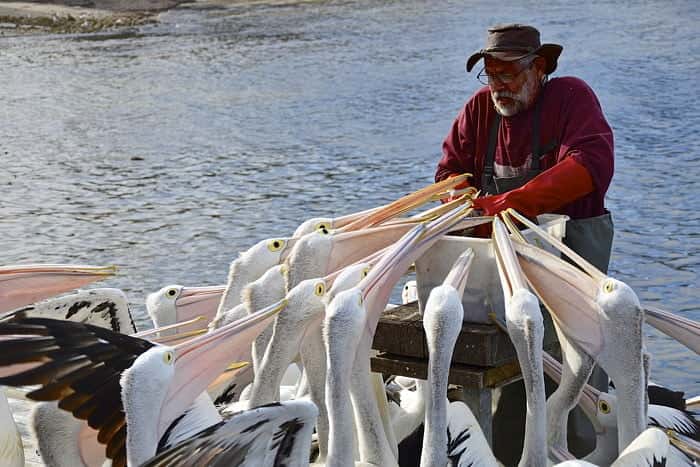 One third of Kangaroo Island is protected by being a part of different nature reserves as well as the national park Flinders Chase National Parks in the west. They work actively to preserve the island as a natural sanctuary for animals and nature. Increasing tourism means that more and more luxury resorts are being built on the island. The white sandy beaches, the hidden stone caves and the bumpy gravel roads are a strong contrast to the fine restaurants with their white tablecloths. The chefs prepare masterful meals that are enjoyed with wonderful views of the sea. The islanders produce first-class ingredients such as honey, cheese and wine. The local market is flourishing. Don’t leave the island without having tried the fresh seafood. There are also good opportunities for those who want to get away from the hotels and resorts, but without having to give up on all the comforts of civilization. There are several holiday cottages to rent near the water. Or why not put up a tent under the skies and enjoy the tranquillity.

If you want to have enough time to discover Kangaroo Island, you should set off at least three to four days. Otherwise it will be stressful. At the far west of the island is Flinders Chase National Park (environment.sa.gov.au/parks/Find_a_Park/Browse_by_region/Kangaroo_Island/Flinders_Chase). There is a Visitor Information Centre (southaustralia.com/places-to-go/south-australia/visitor-information-centres/kangaroo-island-vic) in Penneshaw and one adjacent to Flinders Chase. Entrance tickets to the national park can be purchased at the information centres.

There are many hiking trails leading through the park. Ask any staff for assistance in finding a suitable alternative. Flinders Chase largely consists of forest and wilderness and works well for tourists. Even cars without a four-wheel drive are ok to use for driving through the park. The most spectacular sights include the Remarkable Rocks and Admirals Arch, which are located south-west. Remarkable Rocks’ rust-coloured boulders have been shaped by the elements of the weather and they look like a bunch of rough dice that has been thrown out on top of the flat rock surface. Not far away you will find Admiral’s Arch whose roof forms a vault where the stalactites hang down. Just in front of the cave, a large colony of seals has taken over. But there are also plenty of other wildlife to see. Koalas, kangaroos and wallabies live in most places within the national park. And if you are lucky, you can see platypus bathing in any of the waterholes. 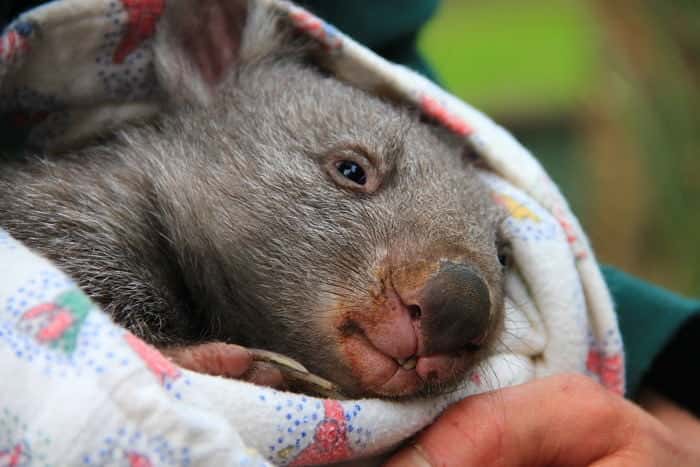 Explore the limestone caves at Kelly Hill Conservation Park (environment.sa.gov.au/parks/Find_a_Park/Browse_by_region/Kangaroo_Island/Kelly_Hill) along the island’s south coast. The cave systems are full of impressive stalactites and stalagmites. Join an experienced guide on a guided tour of the caves. Visit the park’s Visitor Information Centre for help with reservations. Entrance fee applies. Further to the east is the Seal Bay Conservation Park (environment.sa.gov.au/sealbay/home). Here you will see the Australian sea lions. A large colony of around 1,000 sea lions live here and can often be seen lying in the sun on the beach. There is an information centre where you can turn to if you want to go on a guided tour. Otherwise it is completely free to walk around here on your own.

Kingscote is the largest town in the island. You will find everything you need here, like bank, supermarket, shops and restaurants. About half of the island’s residents live in Kingscote, which is a rather sleepy but pleasant city. This is where you come to replenish your supplies rather than stay for several days at a row. The world’s smallest penguin, the little penguin, is found around Penneshaw and Kingscote. They are blue-green and white, and the small animals are just over 30 cm tall. However, the number of penguins on Kangaroo Island has fallen drastically in recent years. The seals that live around the island are said to be the cause of the problem. Still there is a chance to see the penguins at the beaches around Penneshaw and Kingscote at dusk. At 1157 Elsegood Road just outside Kingscote is Clifford’s Honey Farm (facebook.com/CliffordsHoneyFarmKI/) A family-run beekeeping business using pure-bred bees originating from Italy. Since the beginning of the 1990s, the couple Jenny and Dave Clifford have been selling honey-related products to customers in their store. Among other things, there are beeswax, lip balm and candles for sale. But also, ice cream, mead, and of course different kinds of honey. A 20 minutes’ drive north from Kingscote is Emu Bay, a long cream-coloured sandy beach where you can cool off after a long day in the area. 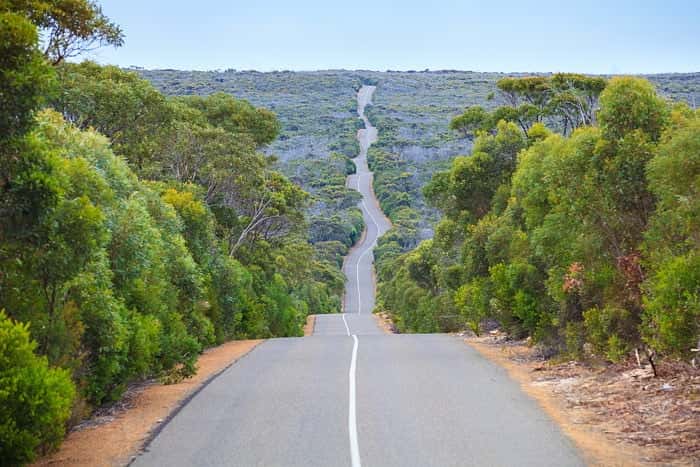 The official website Tour Kangaroo Island (tourkangarooisland.com.au) is full of tips for a trip to KI. There you will find much relevant information and phone numbers to keep close at hand. Once on the island, the Kangaroo Island Gateway Visitor Centre is located along Howard Drive in Penneshaw, where the ferries arrive. They can help you book activities and are happy to provide you with tips on what to do on the island. Entrance fees apply to the Flinders Chase National Park and some nature reserves. If you are planning to visit several of them it may be worthwhile to invest in a Kangaroo Island Tour Pass (environment.sa.gov.au/parks/Park_Entry_Fees/Parks_Passes/Kangaroo_Island_Tour_Pass), where entry to most places is included, as well as some guided tours.

You can take a ferry from Cape Jervis on the Fleurieu Peninsula to Penneshaw on the east side of the island. Sealink (sealink.com.au) usually goes through the waters of Backstairs Passage three times a day, but the number of departures is often extended during peak season. To make sure you get a seat, you do best to pre-book. If you want to avoid a rocky ferry, Regional Express flies (rex.com.au) daily to Kangaroo Island from Adelaide. The journey takes barely half an hour. The island’s airport is in Kingscote.

Public Transport is an unknown concept at KI. It is therefore necessary to plan your stay in advance. If you want to drive, it is easiest to rent vehicles on the island (wotif.com/Car-Hire). Some roads are not paved, so make sure of what insurance applies to the car if you plan to rent. A nice alternative is otherwise to book a guided tour to take you around the island. There are many to choose from (wotif.com/things-to-do/search?location=Kangaroo%20Island,%20South%20Australia). The family-owned company Exceptional Kangaroo Island (wotif.com/things-to-do/kangaroo-island-life-day-tour-with-lunch.a193094.activity-details) is popular amongst tourists. They arrange small group trips across the island where good food and drinks combined with cool nature experiences is on the schedule. 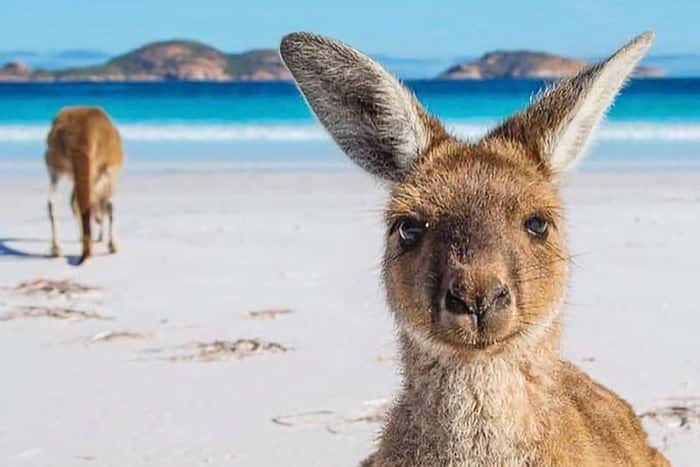 There are four good campsites within the Flinders Chase National Park (environment.sa.gov.au/parks/Find_a_Park/Browse_by_region/kangaroo-island/flinders-chase-national-park#see-and-do), Rocky River, Harvey’s Return, Snake Lagoon and West Bay. The campsite at Rocky River is the largest and it also has the most facilities, such as toilets, showers and barbecue grills. The campsite is located at 4 South Coast Road, four kilometres from the national park entrance. Reservations are advantageously made online, but a stay can also be booked through the information centre. There are not many hostels at KI, but KI Dragonfly (hotelscombined.com/Hotel/KI_Dragonfly_Guesthouse.htm) is a good option located along 19 Murray Street in Kingscote. The hostel is centrally located in the city and did undergo a renovation in 2017. It is spacious, clean and fresh. Prices are reasonable and bed linens are included. They have Wi-Fi, washing machines and safes. A nice backyard with barbecue. Choose between sharing rooms with up to eight people or renting a whole room on your own.

If you are travelling in a company, it may be a better idea to rent an apartment. Kangaroo Island Acacia Apartments (hotelscombined.com/Hotel/Acacia_Apartments_Kingscote.htm) have nice two-bedroom apartments equipped with kitchen, air conditioning, heated indoor pool, Wi-Fi and barbecue. The apartments are located at 5 Rawson Street in Kingscote, right on the waterfront. The company is run by Deidre who does her best ta make you feel at home on the island. Farther west is Southern Ocean Lodge (hotelscombined.com/Hotel/Southern_Ocean_Lodge.htm) situated on a hill with stunning views of the turquoise sea. The Southern Ocean Lodge is the finest accommodation option on the island and the price will remind you of that. The menu in the restaurant changes every day and they use mainly local ingredients. In addition to the luxurious and bright rooms, there is also a large spa. The staff are happy to help you arrange various activities around the island. 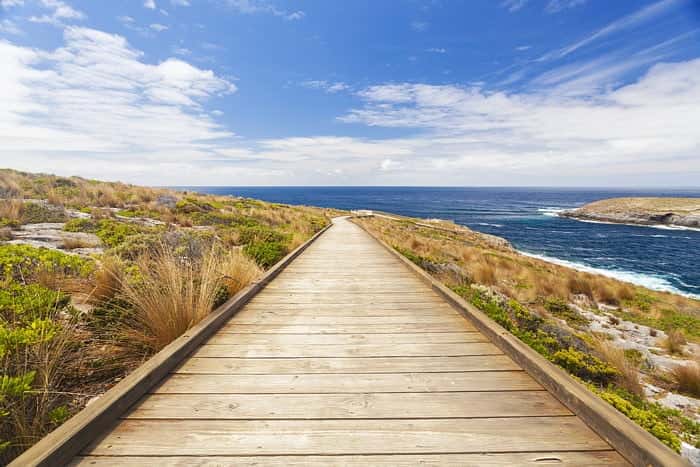 A Saturday on Kangaroo Island

Take the earliest ferry from Cape Jervis to Penneshaw. About 45 minutes later you step ashore on Kangaroo Island. Rent a car in Penneshaw and drive towards the largest city of Kingscote. Once in the city, you make a visit to Kangaroo Island Fresh Seafood at Caltex gas station on 26 Telegraph Road. Buy with you a bunch of fresh seafood that you store in a cooling bag. Drive north to have lunch overlooking the beach Bay of Shoals.

After a small lunch and a swim, you drive south towards Seal Bay. Turn onto South Coast Road and stop at the Visitor Information Centre in Seal Bay Conservation Park to get a map over the area. Then walk down to the sea where you likely will see a group of sea lions on the beach. Around a thousand of them live here and they do not mind being photographed.

You get back on the road again. Your next given stop is the Kelly Hill Conservation Area, along the southern coast. Specifically, the limestone caves of Kelly Hill Caves are to be visited. Ask the staff at the Information Centre to book a guided tour of the cave systems if possible. Otherwise, you can walk around on your own. The caves are not filled with water, so ordinary comfortable sneakers are fine to wear.

From Kelly Hill Caves, drive west towards Flinders Chase National Park. When you arrive at the national park, head toward the naturally formed stone bridge called Admiral’s Arch. You can spot the seals living on the coast outside the beautiful stone arch. Move on to the photo-friendly stone formations in granite, the reddish-brown, Remarkable Rocks.

If you still have time and energy after a long day you can go to a waterhole to look for platypus swimming around. Otherwise, it is high time to camp for the evening. Park at Rocky River’s campsite and cook a dinner on a gas barbeque with ingredients you brought with you. Surely you will meet more travellers to talk to who also are holidaying at KI. Then sleep well under the stars in Flinders Chase National Park.