Like western movies? Then you have come to the right place. Few cities in Australia are as mythical as Kalgoorlie-Boulder. Intense red sand, one of the world’s largest gold deposits and a wide selection of pubs. No wonder the city got something of an iconic status. Kalgoorlie-Boulder is located 590 km east of Perth in the heart of Western Australia’s dusty Outback. The city has around 33,000 inhabitants and still attracts visitors and adventurer. Kalgoorlie was founded in 1893 after Irishman Patrick Paddy Hannan and his travel companions Thomas Flanagan and Dan Shea found gold during their journey. This marked the start of the area’s goldrush and the discovery of what is now called the Golden Mile, which is one of the richest deposits in the world.

In 1989, Kalgoorlie officially amalgamated with its neighbouring city of Boulder and the double name was a fact. Through the city runs dead-straight streets, wide enough for a company of camels to be able to turn, which was the means of transport used before motor transports came to be. There are many historic buildings left along the streets. The historic York Hotel was built in 1900 and is one of the city’s most famous buildings. In Kalgoorlie-Boulder you will find the Super Pit, an ugly rust-brown scar that has proven to be a literal goldmine. For a long time, Super Pit was the biggest, but during 2016, Boddington Gold mine took its place as number one. With its depth of 600 meters, Super Pit is still one of the world’s most powerful pits. 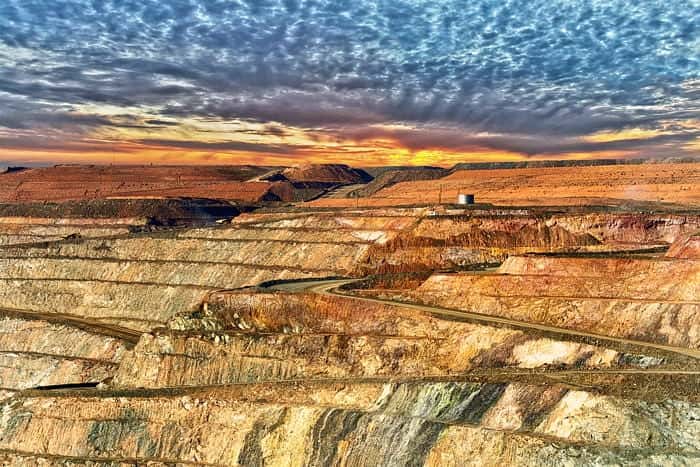 Early on, Kalgoorlie had a reputation for being a lawless city characterized by bandits, fights and widespread prostitution. Parts of that picture still exists today. Many brothels remain, alcohol consumption is alarmingly high, and prostitution is fully legal. Kalgoorlie-Boulder has long been a rough mining town where workers come at the end of the day to spend their hard-earned dollars and cool off with gallons of beer. Unwinding has been synonymous with being served by female bartenders in panties and bra. It can be said, that Kalgoorlie-Boulder, also called Kal, is not for everyone. The place is in many ways old-fashioned. But that is perhaps exactly what makes it a different place, a place you probably never will forget. The geography, the heat and the characters make the city unique (wotif.com/discover/australia/western-australia/kalgoorlie-boulder.d1800).

Despite this, the city is slowly changing. Local politicians are struggling to change the image of Kal. Today, tourism is at least as important as the extraction of gold and iron ore. And many of the miners choose to spend their money elsewhere.

Hannan’s North Tourist Mine (hannansnorth.com.au) is open Sunday-Friday between 09:00 and 16:00. You pay an entry fee and then get access to what can best be described as an outdoor museum. Climb aboard one of the gigantic trucks, pan for gold and watch old videos that tell the story of Kalgoorlie-Boulder. This stop is also suitable for families with children. 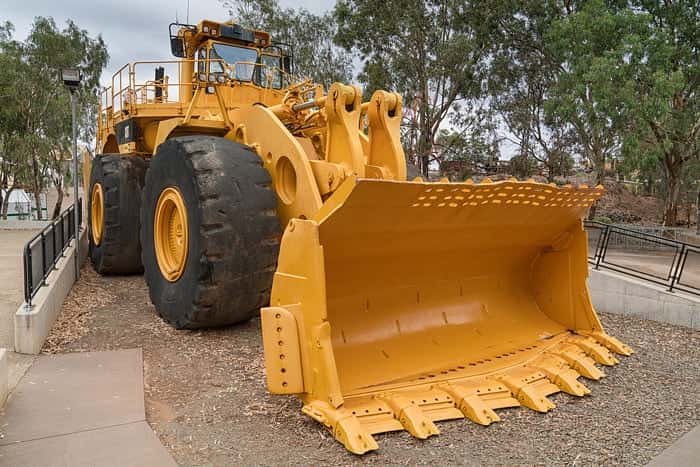 Between 07:00 and 19:00 it is possible to visit The Super Pit (superpit.com.au). Get to the vantage point (which is free of charge) for an overview of the area. Signs with information are placed out. To see more of the area, you need to book a tour with Kalgoorlie Tours (kalgoorlietours.com.au) which is the only company that can show the area for tourists. Choose between tours of one and a half or two and a half hours where you get to walk around the mine along with a knowledgeable guide. The mine, which is over 3.5 km long, is visible from space. You can see it from above by airplane if you wish (wotif.com/things-to-do/big-pit-scenic-flight.a490485.activity-details).

A good place to be at when the sun goes down is Mount Charlotte Reservoir Lookout. From there you can view Kalgoorlie-Boulder. Make a turn at Sutherland Street from Goldfields Highway and follow the signs for Collier Place.

It is free entrance to the Museum of the Goldfields (museum.wa.gov.au/museums/museum-of-the-goldfields) and they are open every day between 10:00 and 15:00. The museum is located at 17 Hannan Street. Here, the story of Kalgoorlie’s goldrush is told in an informative and comprehensible way.

At the airport in Kalgoorlie-Boulder, you can learn more about the vital work that the nurses, pilots and doctors at the Royal Flying Doctor Service do (flyingdoctor.org.au/wa). They have a visitor centre that is free but thankful to receive donations. Open Monday to Friday between 10:00 to 15:00. An informative tour starts 10:15 and is it well worth a visit.

The oldest brothel in Kalgoorlie that remains open is Questa Casa (questacasa.com) at 133 Hay Street. Every afternoon, visitors of age can come inside for a tour of the premises and learn more about how life might have looked like for the prostitutes who worked at Questa Casa.

At 259 Hannan Street is The York Hotel (yorkhotel.com.au) which perhaps is the most beautiful building in the city. Come here for a bite to eat, a little drink or simply to admire the architecture.

Every year in September, Kalgoorlie-Boulder Racing Round is held (kbrc.com.au/race-round.php). Visitors pilgrimage to the city and dress up to their teeth to cheer and spend money on horse racing. 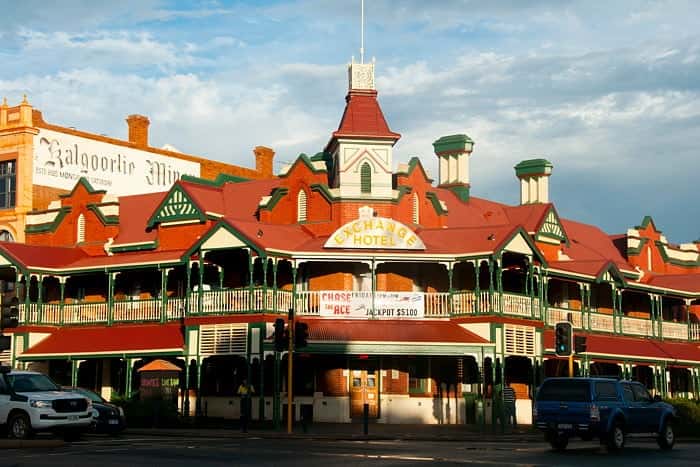 There are a whole bunch of pubs along the main street, Hannan Street, although some have been closed as times change. The businesses are no longer as good as they once were. Beaten Track Brewery is a small local brewery (beatentrackbrewery.com.au) at 25A Dwyer Street. They serve six different kinds of beer. Forget all there is about watery beer. This gem is in private premises. Book in advance. One of the best restaurants in the city is the Balcony Bar & Restaurant at the Palace Hotel (palacehotelkalgoorlie.com/balcony-bar-and-restaurant). They serve hearty pub food, which is a little higher on the price scale. Open from 16:00 every day.

Many are the backpackers who set foot in the country with the hope of getting jobs in the mines. We have all heard of the stories of a friend’s friend who has earned his weight in gold in mining. And of course, it is possible, but to have a chance, experience and education is the key. Competition is fierce and without relevant knowledge on your CV, it is difficult to become an employee. If you don’t have any relevant experience, try looking for a less demanding job, like a chef, cleaner or bartender. This can result in contacts that give you the opportunity to move forward. However, be prepared that underground work is not an easy task, especially for those suffering from claustrophobia.

Inside the beautiful town hall at 316 Hannan Street is Kalgoorlie-Boulder Pure Gold Visitor Centre (kalgoorlietourism.com), a visitor centre where you can get help with most things. From tips and advice to bookings of activities and accommodation. On their website you can download a PDF map of the city. For more information about Kalgoorlie Boulder and the area, take a look at the Australian Golden Outback website (australiasgoldenoutback.com).

Kalgoorlie-Boulder is located almost 600 kilometres east of Perth. Follow the Great Eastern Highway to its end. Both buses and trains run from Kalgoorlie Central Station on Forrest Street. Trans WA (transwa.wa.gov.au) run buses between Kalgoorlie and Perth several times a week. Trans WA also runs the Prospector train between the cities. The journey takes just seven hours, but the tickets are almost twice as expensive as the bus tickets. Even the Indian Pacific train (greatsouthernrail.com.au/trains/the-indian-pacific) stops at Kalgoorlie on its way between Perth and Adelaide.

Kalgoorlie’s airport is located about six kilometres outside the city centre. Both Qantas and Virgin Australia flies between Perth and Kalgoorlie several times a day (wotif.com/Flights). Trans Goldfields has three local lines in Kalgoorlie-Boulder (kalgoorlietourism.com/travel-tips-and-maps/travel-time-tables). Buses run via Hannan Street, Boulder and Somerville. 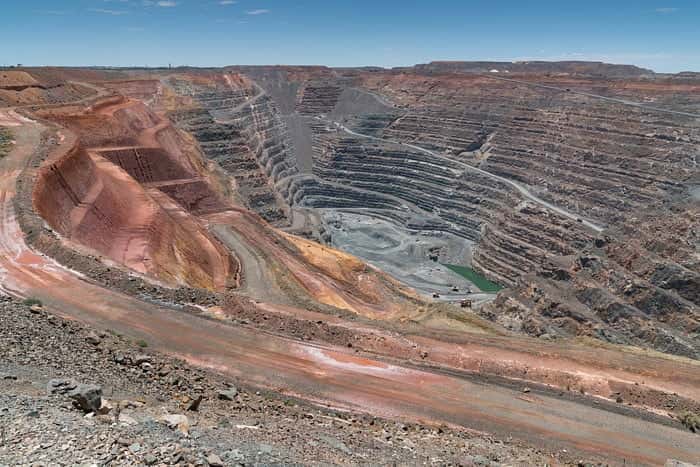 There are five different campsites to choose from in the city. One of them is Acclaim Goldminer Tourist Caravan Park (hotelscombined.com/Hotel/Acclaim_Goldminer_Tourist_Caravan_Park.htm) where you have access to BBQ, a small shop and a chance to refill your LGP gas. It is conveniently close to the Western Australian Museum Kalgoorlie.

Kalgoorlie Backpackers (hotelscombined.com/Hotel/Kalgoorlie_Backpackers.htm) is centrally located at 166 Hay Street. They offer beds in a dormitory, single- or double rooms. The costs are from $30 per night. Internet access, swimming pool and a pool table are available. It is an okay budget option for those who want to meet other travellers. At Kalgoorlie YHA Backpackers (hotelscombined.com/Hotel/Golddust_Backpackers_YHA.htm) you get to stay one night from 29 dollars. The hostel is located at 192 Hay Street. A variety of activities can be arranged at their front desk. A bit scruffy but one of the cheapest options in the city.

If you want to experience a touch of history, check in at the Palace Hotel (hotelscombined.com/Hotel/Palace_Hotel_Kalgoorlie.htm) at the corner of Hannan and Maritaa Street. The decor is a bit outdated, but it is a cool building with more than 100 years on its neck. There are many different room options, however, be aware that the sound level may be high during evenings. Opposite the train station, at 51 Forrest Road is the Quality Inn Railway Motel (hotelscombined.com/Hotel/Quality_Inn_Railway_Kalgoorlie.htm) with 95 motel rooms and six fully equipped apartments. It is recently renovated, and the rooms are fresh. A restaurant serving breakfast, lunch and dinner is also available on site.

If you are a group travelling together, Quest Yelverton Serviced Apartments (hotelscombined.com/Hotel/Quest_Yelverton_Kalgoorlie.htm) might be a good option. They have fresh and modern apartments in a central location on Egan Street, only a few minutes’ walk from shops. Here is everything you need, but this is a more expensive option. 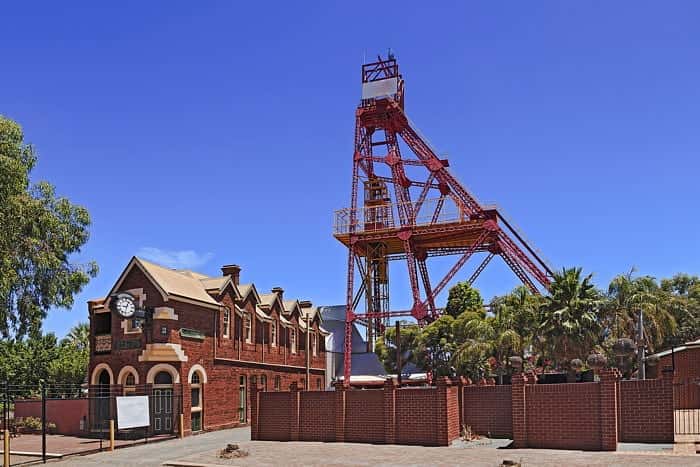 A Saturday in Kalgoorlie-Boulder

Coffee craving? Silly question. Take your pick and pack and sit down on one of the chairs inside the Relish Café, the city’s best coffee place (facebook.com/relishkalgoorlie) at 202 Hannan Street. Their doors open at 06:00 and it is a popular stop on weekends, so come early. Embrace your inner hipster and order smashed avo on sourdough or why not simple scones with jam and cream.

Of course you have been out in good time and booked a round-trip of two and a half hours in the Super Pit with Kalgoorlie Tours (kalgoorlietours.com.au). A visit to Kalgoorlie-Boulder is not complete without having seen one of the world’s biggest open pits with your own eyes, and now you even get the chance to see it up close. Make sure you have the right clothes with you and don’t forget the camera.

Blaze Café is located in Boulder’s old fire station (facebook.com/Blaze-Cafe-239929059548512) at 110 Burt Street, which is the light lunch stop of the day. They have plenty of salads, shakes, cakes, sandwiches and much more to choose from. If you feel restless, you can always order take away.

After your meal you feel a hunger for learning more of the area’s history. Luckily, Hannan’s North Tourist Mine (hannansnorth.com.au) is not far away. Wander through the open-air museum to learn more about the mining work and the city’s background. Watch the videos and test what it’s like to pan for gold, just like a real gold digger.

Whoosh, and the evening has arrived. Head to Cecilia’s on Hay (ceciliasonhay.com) on 181 Hay Street for evening dining at this cosy tapas restaurant. Try the generous selection of vegan and vegetarian hors d’oeuvres to find your own favourites. Sit inside or out, choose after your own pleasure.

If the sun has not set yet, hurry to Mount Charlotte Reservoir and Lookout to get the best view over the city as it bathes in a golden evening-light. Otherwise, head to the Exchange Hotel to finish the day at the Wild West Saloon, one of the oldest watering holes in the city (exchangekalgoorlie.com.au) at 135 Hannan Street. The beer is cold, music is played, and people are flowing in.