A genuine Australian adventure awaits in New South Wales’ west. Beyond Sydney’s urban concrete jungle and the coastal strip’s rolling waves lies the country’s inner core. Here, barren and jagged wilderness dominates the landscape. A bit offhandedly, the Great Dividing Range is used as a landmark of where the desert begins in the state. But it is not until you travel another few hundred kilometres that the desert hit you with its full force. The country is desolate, you are surrounded by vast, dusty plains. The deep-blue sky is a strong contrast to the orange-red sand and it beautifully frames in the ominous landscape. Dried desert shrubs break away from their roots and tumble around in the wind. 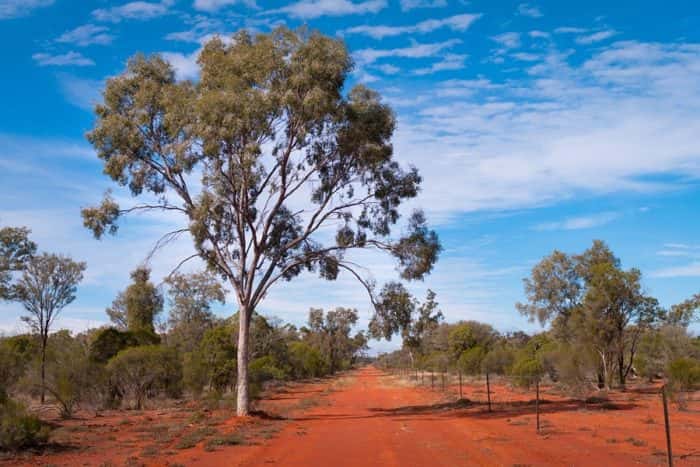 Expect soaring temperatures and fine-grained desert-sand that makes your eyes tear. Embark on a spectacular journey. Travel along narrow surfaced roads and winding roads consisting of hard-packed sand. Drive a rusty old car from east to west or from north to south. Through the monotonous landscape, with the radio on and the engine’s humming in the background. Glance in the rear-view mirror to see the dust tail you leave behind. A place without end, where borders been blurred out. Encounter curious animals wondering what it is that disturbs their peaceful existence. But your most important companions are drinking water, a can of petrol and plenty of time. The distances are ludicrously far. But there are some hidden gems in the desert. Discover old mining cities with new-found cultural capital such as Bourke and Broken Hill. Where art has had the chance to expand.

Wander through lush national parks. Explore places where Aboriginal history is carved into the cliff walls. Float along the Darling River, the country’s third longest river feeding its surrounding area. Like a snake of water, it meanders over 1,400 km until it finally intertwines with the Murray River at Wentworth. Nearby, visit the wacky opal town Lightning Ridge, where eccentrics lives on the dream of making their earning from the underground. The Northwest corner of the state is called Corner Country. Within the dead-straight borders lies the distant town of Tibooburra. The skin is baked in the sun and soon adopts a darker shade. The town has been favoured with extreme temperatures. Just next to it lies Sturt National Park, whose greenery give some relief to the sun’s pressing heat. Corner Country borders Queensland in the north, and South Australia in the west. Throughout the state’s countryside, there are several ghost towns left to an uncertain fate, testifying of past times of greatness. 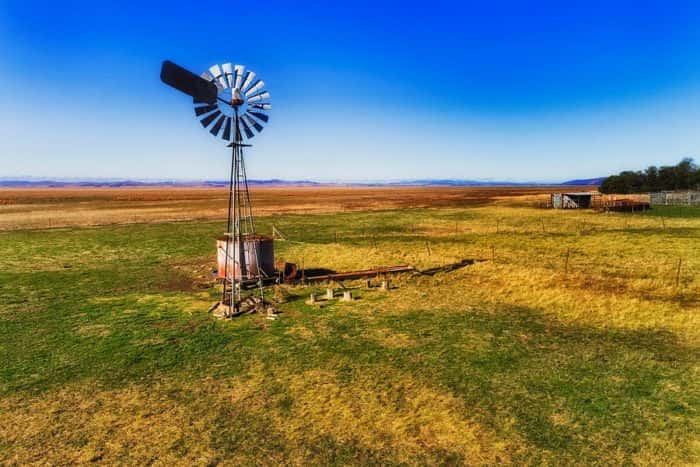 Visiting New South Wales’ countryside is seldom high up on tourists’ to-do lists. Maybe it’s because few people know what there is to see. Or perhaps the reason it that it takes a bit of an effort to reach the inner areas. But don’t let this stop you. Join a guided tour through the country’s inner parts or rent a car and split the cost with others. The region revolves around nature and life in the countryside.

Broken Hill is one of the larger inland cities with around 18,000 inhabitants. Like an oasis, the silhouette of the city rises in the flat desert-landscape. Broken Hill is closer to Adelaide than Sydney, but it still takes at least a full day behind the wheel to get here. For a long time, the city relied mainly on mining work for its support. Especially silver, lead and zinc. Hence the nickname Silver City. The mines are still in use and you can explore one by joining a guided tour. However, the wool industry has become just as important for the city’s economy. Activities related to culture have grown, with several art exhibitions and museums available. Twelve sculptures have been exhibited in nature to be admired by people passing-by. While you are in place, you might as well take the opportunity to learn about the Royal Flying Doctor Services’ work in the region. 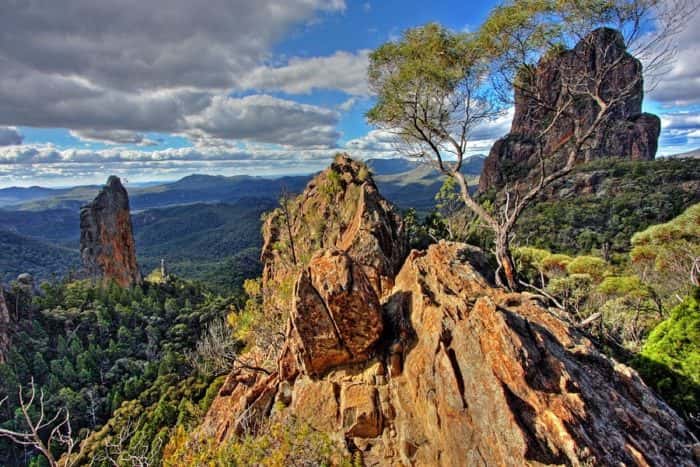 A few miles west, just before you reach South Australia is Silverton. The town’s population has fallen steadily, from 3,000 during the heyday to today’s modest 50. Like Broken Hill, this is a town built on silver. Today, it is no more than an enthralling ghost town, giving you a taste of life on the outskirts. The pub at the local Silverton Hotel endures and continues to liven up the atmosphere, it is a welcome sight, a place where you can sleep, satisfy your hunger and quench your thirst after coming through the desolate desert. Between Mildura and Balranald, beside Lake Mungo, lies Mungo National Park (nationalparks.nsw.gov.au/visit-a-park/parks/mungo-national-park). The wind sweeps over the sand and creates high sand dunes called Walls of China of which the park is known for. You can drive Mungo Loop Track through the national park and stay overnight in a tent. This requires access to your own car, or alternatively, you can travel with a professional company on a guided daytrip.

Close to Darling River lies the town of Bourke. During the winter months, you can float down the river on the boat PV Jandal. Bourke has been etched into the memory of the Australians thanks to the term Back O’Rourke which refers to its distant location. It is said that the true Outback does not really begin until you have passed the city, hence Back O’Rourke. Thirty kilometres eastward awaits the opal town Lightning Ridge, the largest producer of the extravagant black opal which is very valuable. Here, you’ll find many odd types that work very hard to earn their daily bread. Just as in Coober Pedy, people live underground to seek coolness from the desert’s heat (wotif.com/things-to-do/desert-cave-opal-field-tour.a477679.activity-details). South from there is Guidebook National Park (nationalparks.nsw.gov.au/visit-a-park/parks/gundabooka-national-park) which has aboriginal rock art.

With a bit of determination, you can get all the way to Corner Country, the northeast corner of NSW, bordering the Northern Territory and South Australia. The main town is called Tibooburra and is the most distant place in the state. Tibooburra is also “blessed” with the highest temperatures. The town is a gateway to Sturt National Park. A high fence runs along the state-borders and keeps the wild dingoes away. The park is desolate and grand. Something for the photo interested who doesn’t care about getting a bit of grit under the fingernails. Just outside the town of Cuba, along a rough road, lies Mount Grenfell Historic Site. This has been an important place for thousands of years for the Aboriginal tribe of Niyama. Here, their stories are engraved on the cave walls. You can also follow one of the park’s hiking trails to reach beautiful vantage points. 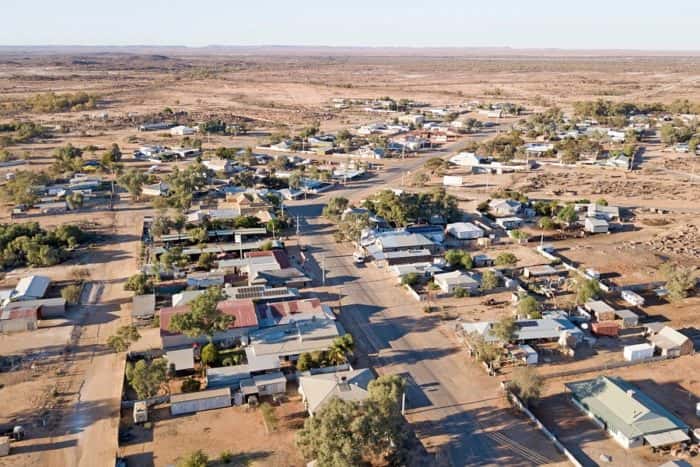 There is a Visitor Information Centre in Broken Hill on the corner of Blende and Bromide Street (travelin.com.au/go/broken-hill). They are open between 08:30 to 15:00 or 17:00. There are also information centres in Bourke at Kidman Way (visitbourke.com.au) and in Lightning Ridge at Bill O’Brien Way. You can also read more on Visit New South Wales’s website (visitnsw.com).

Summer is between November and February, with temperatures closer to 40 degrees Celsius, often higher. It is advisable to avoid a visit during this time. Many sights are closed during the summer. Instead, visit in winter between June and September, when temperatures are more comfortable. Or plan a visit in the autumn to see the area in all its splendour, as the rain has brought life back to the landscape.

Don’t travel alone in the wilderness, it can be lethal. It can go days without you encountering another person. Telephone coverage is often inadequate. There is an excruciating heat and very little shade in the outback. Make sure you have everything you need to be able to cope in all kinds of situations, for example spare tyres, shade, food, an extra can of fuel and plenty of drinking water. A desert trip means extreme changes in temperature. Even though the days are hot, the nights can be icy. As soon as the sun goes down, the sand becomes cool and then cold. Four-wheel drive is recommended if you want to drive along roads that have not been surfaced. 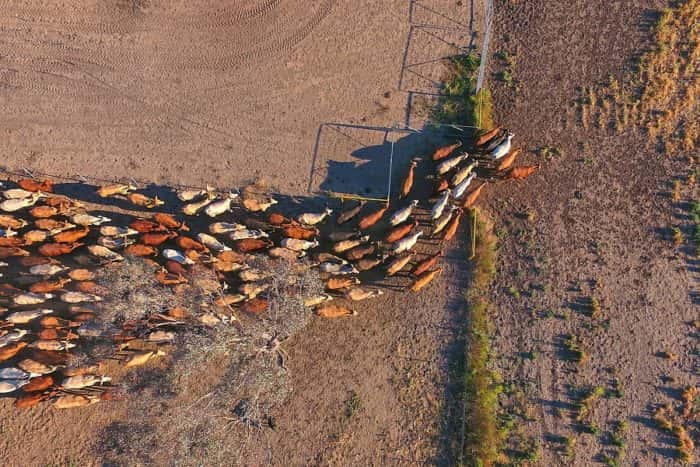 In order not to skimp on the experiences, rent a car with four-wheel drive (wotif.com/Car-Hire). Maybe together with three, four other people. Fill the tank to its brim and for God’s sake, do not forget to bring a little extra of everything. Especially drinking water, fuel and time. A car journey in these regions should not be rushed. No matter where you start, Broken Hill is a city you shouldn’t miss. With the best range of restaurants and cafés in the desert, you should take the opportunity to treat yourself before a long journey. Look at the Flying Doctor’s largest visitor centre. From Broken Hill, it is not far to Silverton. This photobombed little town on the edge of the world is a reminder of its former glory days. Thousands have moved from the town, but some brave souls live here still. Visit the local pub, a favourite among the locals. There, you can also rest your head for the night and have a meal.

Silver City Highway will take you north. But don’t be fooled by the elegant name. This is a bumpy and uneven road that is only partially surfaced. And it takes many long hours to drive. Set your sights on Tibooburra. From there, drive to Sturt National Park where you camp for the night. You can also get to the corner of the state. Next day, drive east to Bourke via Wanaaring. This is a long unsurfaced road, so make sure you have all necessities before you try. At Bourke, glide along Darling River on a boat, dine under the stars while listening to music mixed with poetry. Finally, travel to Lightning Ridge. Join in on a guided tour far below ground. Try your luck on your own. Dig through the piles of soil and look for treasures.