It is an exciting thought that the next stop to your south is Antarctica. The small port city of Hobart is beautifully situated in the southern part of Tasmania and is a historic and isolated place. Just beyond the city, the mighty Mount Wellington is rising, watching over the rooftops. During winter, the mountain is covered by a white blanket of snow. Hobart is one of Australia’s oldest cities and is still a fishing city where men dressed in rubber boots stroll between trawlers that bob up and down at the wharf. The catch of the day is fried and served as simple fish and chips in the harbour or in the form of first-class meals in one of the city’s restaurants. A stone’s throw away is Salamanca Place where rustic old warehouses have been transformed into cosy cafes and small shops. During Saturdays, a well-visited market is held along the long street where all sorts of handicrafts are on sale. Follow the Kelly’s Steps just behind which will take you up to the old district of Battery Point, which has escaped new constructions and is a piece of preserved history. It is a charming neighbourhood with cobblestones, lace tablecloths and book shops. As soon as you leave Hobart and head west you will be met with rolling hills and deep forests. For those who want to see more of the island’s national parks, the Hartz Mountains National Park with alpine landscapes and great hiking opportunities might be appealing, or the Mount Field National Park which offers fine trails and views. Here you will find waterfalls and soaring high tree trunks.

The Tasmanian Highlands consist of a varying nature. From open farmlands in the east to the wilderness in the hilly landscapes of the west. The highlands are full of small lakes and the forests full of cypress trees. During the winter, the area is embedded in a blanket of snow. The guidebooks rarely call the area “Central Highlands”, but often divide the area into the four directions; the east, west, north and the south.

The highlands are 1,000 meters above sea level, making it the coldest place on the island. Sleet rain, hail and storms are frequent. It is said that there are four seasons in the space of 24 hours. So, if you don’t like the weather, just wait five minutes. Come prepared with warm clothes, a protective shell jacket and bring a pair of sturdy boots. The central part of Tasmania is sparsely populated. Today, no more than a thousand people live here. Villages that were once thriving are now deserted. Wadamanna, Poatina and Tarraleah are names of locations that were built for the workers in the area. Dam construction and hydroelectric plants created jobs on the island. Many workers were settlers who came with their families from Europe. The villages expanded and got shopping malls, post office and church, but also cinema and school. At the end of the 1900s, jobs disappeared, and the workers moved. Today, many of these houses and buildings remain as a testimony of what life looked like in the towns of the Tasmanian countryside over a century ago. 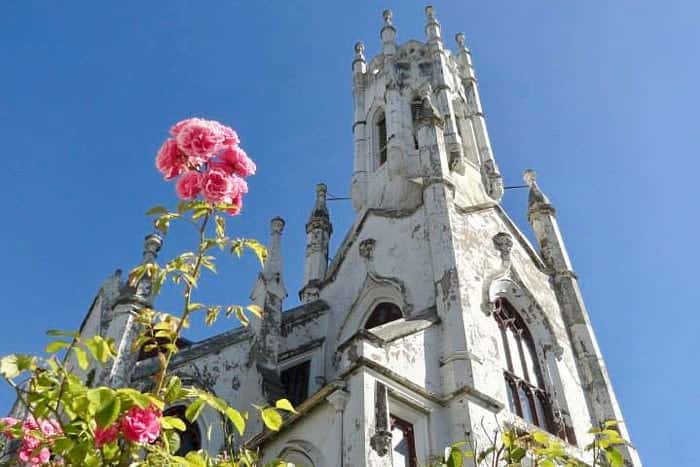 Launceston is the second largest city on the island of Tasmania. Launceston, also called “Lonnie” by the locals, is located 200 km north of Hobart. The city lies in beautiful surroundings where the rivers of South Esk and North Esk meet, forming the Tamar River which flows into the Bass Strait 58 km north. Launceston was founded in 1804 by British colonizers and is the country’s third oldest city. Fortunately, lots of history is preserved along the streets. Many pompous Victorian buildings remain from the heydays of the end of the 1800s and early 1900s. Launceston is not pretentious but is a charming small city that is still growing. The number of inhabitants is just over 100,000. The city feels safe and authentic. The area on the northern part of the island has four seasons and is a centre for food, drink and culture. The land is fertile and in addition to an abundance of fresh fruit and local dairy products, the area in the surrounding Tamar Valley is a large wine-producing district. 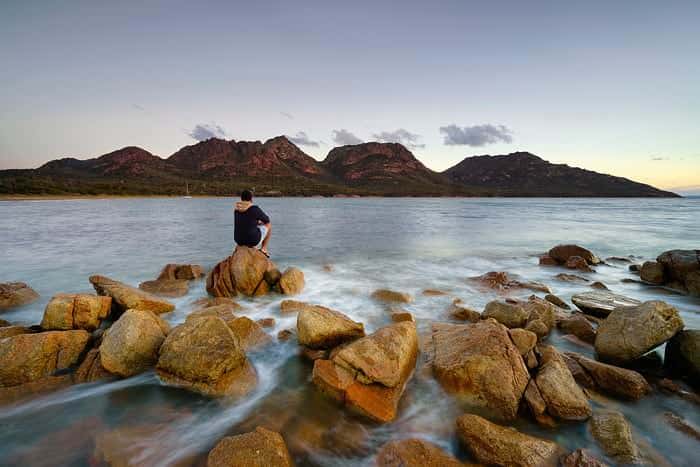 In the middle of Tasmania’s East Coast lies Freycinet National Park. Freycinet is a highlight for many during a trip to the small heart-shaped island. This dazzling paradise in the east leaves no one indifferent. The park is mainly known for Wineglass Bay and its sandy beach that curves into a perfect bow. Just behind, watching over the beach, lies the grey shimmering mountain range, the Hazards, which turns beautifully pastel pink in the sunrise. The Hazards’ three mountain tops Amos, Dove and Mayson frame the surroundings and are all three hiking-friendly options. Wineglass Bay has previously been voted one of the ten most beautiful beaches in the world by an American outdoor magazine. Many come here to look closer at the beach, but few realize how demanding the hike is. A sweaty walk will slowly lead up along the ridge to a vantage point over the bay. Here, many people choose to take a photo before they go back to the parking area. If you still have energy left, follow the steep path down to the famous beach. You pass large rocks and stone boulders and the path is covered by Eucalyptus leaves as you walk through a bushy forest. Once down, you will be richly rewarded. The beach strip is long, and the sand is soft. The water is icy-blue and crystal clear. The only thing you can complain about is the water temperature that can be a little cooler than you expected. It happens from time to time that whales swim past further out at sea, and one or two dolphins might be happy to greet you. Eagles have been spotted here too. 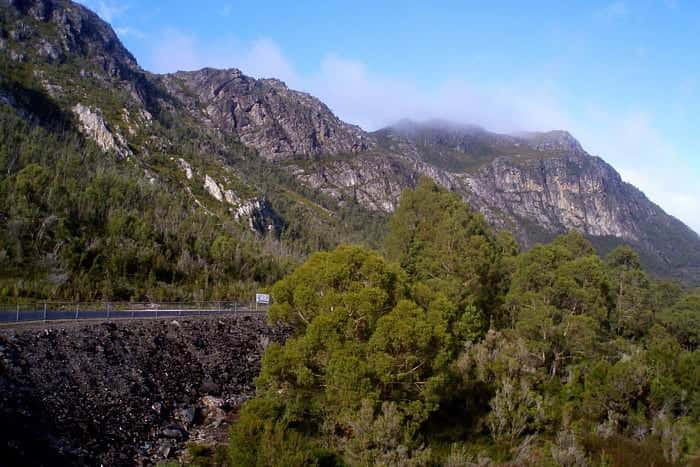 The barren and heart-shaped island of Tasmania is located south of the Australian state of Victoria. Mainlanders often talk about the island as it was a country of its own, far from the Australian continent both in time and space. These comments are often delivered in a mocking tone with a hint of envy. And no wonder. Tasmania happens to be Australia’s equivalent of New Zealand, which would get anyone started. The island is varied and different to say the least. It is an outdoor paradise where sturdy hiking boots and knitted hats have an obvious place in each person’s wardrobe, it even seems to be a part of the obligatory dress code. The west side of the island is nothing for city people and technology nerds that fear the lack of 4G coverage and substandard roads. It is a wild and barren place full of adrenaline and a relaxed atmosphere. Large parts of the West Coast are pure wilderness with dense forests and cascading rivers with icy waters. Here are places that barely has been seen by anyone. Large areas are, to say the least, not easy to reach as vegetation has taken over. The lush forests, however, provide a good base for exploring the pristine nature. Try rafting for several days at the Franklin River or embark on the famous Overland Track trail, which cuts across Cradle Mountain-Lake St. Clair’s innermost essence. It is a rewarding hike of 65 km which is accomplished in a week and offers alp like landscapes. When the lactic acid and blisters slow you down, visit small port towns, take a trip to the ghostly industrial resort of Queenstown that exists thanks to its copper ore, or you can familiarize yourself with the little Tasmanian devil at the Tasmanian Devil Sanctuary. 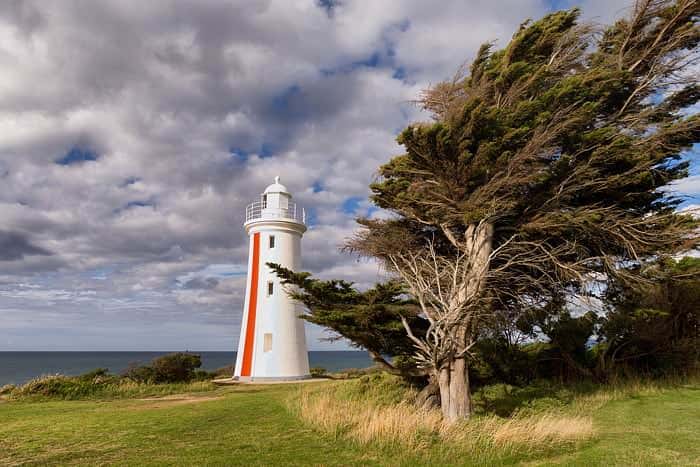 South of Australia’s mainland is Tasmania with its wild nature. Literally. Almost half of the island is wilderness where plants have been growing freely since ancient times, creating a complex ecosystem. The farther west you go, the more primeval forest-like it will get. It is a place where roads cannot penetrate the humid rainforests. Where vines hang like drapes and dark-green moss cover the ground like a rug. Especially the southwest part of the island is dominated by this wild nature. Tarkine Wilderness is an outstanding fairy-tale world of greenery that you can discover by driving along the Wilderness Explorer Highway. The gravel road cuts through the forest and lets you get close to this nature’s wonder. Forest meets mountain tops and seas. As if that weren’t enough, Tasmania is said to have the cleanest air in the world. 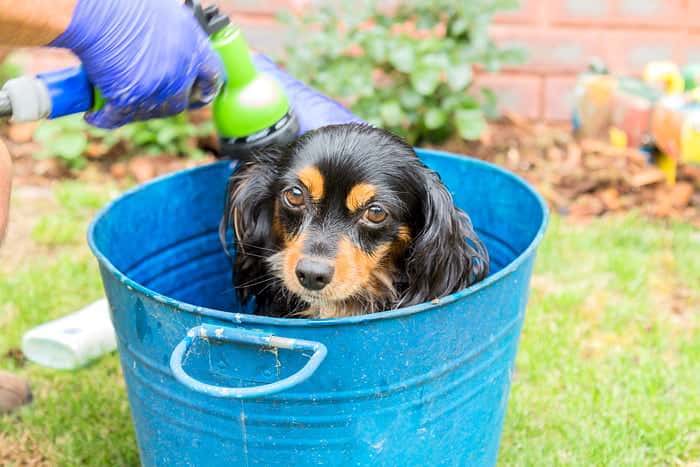 Fresh sea-breeze and beaches. Peace and quiet. In big contrast to Tasmania’s windswept and rain-sprinkled West Coast, the island’s eastern side is the more holiday-friendly option. The East Coast is protected from strong winds and the climate is dry and sunny. The coastline is lined with beaches and lush green parks. Tasmania’s East Coast lacks young partygoers and busloads of tourists. It is a peaceful part of Australia with wonderful forests and glistening beaches. The traffic is minimal, and the roads windy which invites to exciting trips. But don’t make the mistake of underestimating the time it takes to drive. Navigating along these small roads takes many more hours than you can imagine since motorways and straights are rare. If you prefer to be your own machine, you have come to the right place. The East Coast is flat and well suited for longer bicycle rides. Here, small harbour towns are nestled in among the groves in a pleasant sea breeze. Tasmania’s eastern side also has a lot to offer connoisseurs. In the fishing communities, fresh seafood is served and further inland you will find Pyengana Dairy Company that produces creamy cheese that fits perfectly in your picnic basket. 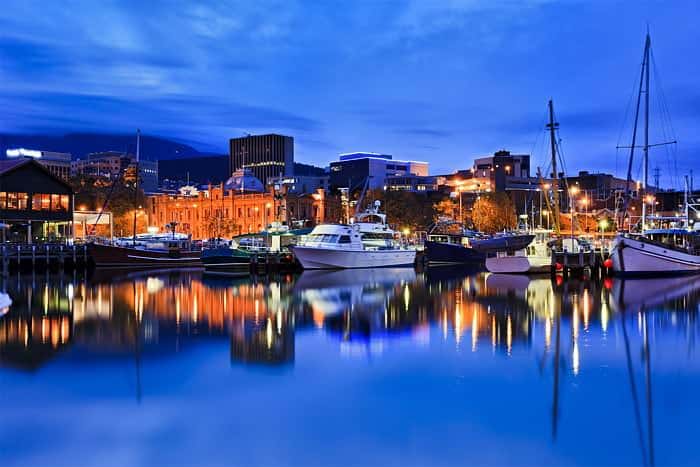 Hobart residents are known to be of hardy types with a fancy for pine tree aroma, salty sea splashes and cool layers. With an impressive wardrobe of knitted hats and leather boots, they happily spend their Sunday afternoons down at the Harbour taverns. They feel proud to be from the largest city in Tasmania. If your heart beats for the same things, it’s easy to get a liking of the place. The city of Hobart is one with its scenic surroundings and enjoys a picturesque location in the hilly landscape. The city spreads far down the island’s east coast. Just behind, the mountain of Mount Wellington shoots up and gives a fantastic view of the surroundings. Hobart is the capital of Tasmania, which besides being an island also is its very own state, south of mainland Australia. Hobart is also the country’s second oldest city after Sydney with a clear British appearance. The Europeans settled here at the beginning of the 1800s. Before that, Aboriginal people lived here but were driven away, tortured and murdered by the newcomers. Hobart has a particularly dark history that is painful and hard to forget. The discriminations played out only a few generations ago, and the wounds have not yet healed.